Ships of the Northern Fleet TV Show Wiki
Register
Don't have an account?
Sign In
Advertisement
in: Fleets

The Fell Fleet is the Royal Armada of the nation of Skyfell, often regarded as the most powerful navy in existence. It was led by Grand Admiral Amisk Atere until she was murdered and replaced by Baron Isaac Kenting. Consisting of ~1000 to ~2200 ships, its primary goal was maintaining the security of Skyfell and its enclaves throughout the north, as well as the total annihilation of any and all that would stand against it.

Of These notable ships, a few stand out more than others. The HLS Dawnsky served as the flagship of Amisk Atere, subsequent to her death. Its role as the primary flagship of the fleet was then replaced by the HLS Midnight when Baron Kenting rose to power. Under the Baron, the Fell fleet started developing the Titan and Juggernaut ship classes, which they would hope to use to conquer the known world. Of these, ony two titans and one Juggernaut were made. The Titans were designed for mass bombardment of enemy stronghold and land structures, and the Juggernauts served as nigh-impenitrable mobile fortresses and construction yards.

Skyfell takes a very different approach to their vessels than their rivals from Devania or other fleets. Although, like Devania, they employ a variant of Levfield and Pulse Sails, their armament strategy differs greatly, favouring a large particle weapon at the front and a long array of cannon to their sides.

Due to their secretiveness, few Fell Fleet ships carry exterior identifying features, requiring others to recognize individual ships by unofficial elements. For example the H.L.S. Midnight has a non structural integrity threatening flaw in her Pulse Sail Matrix.

The Naval Ensign of the Fell Fleet

The Navy Jack of the Fell Fleet 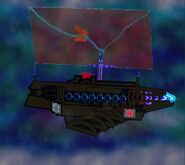